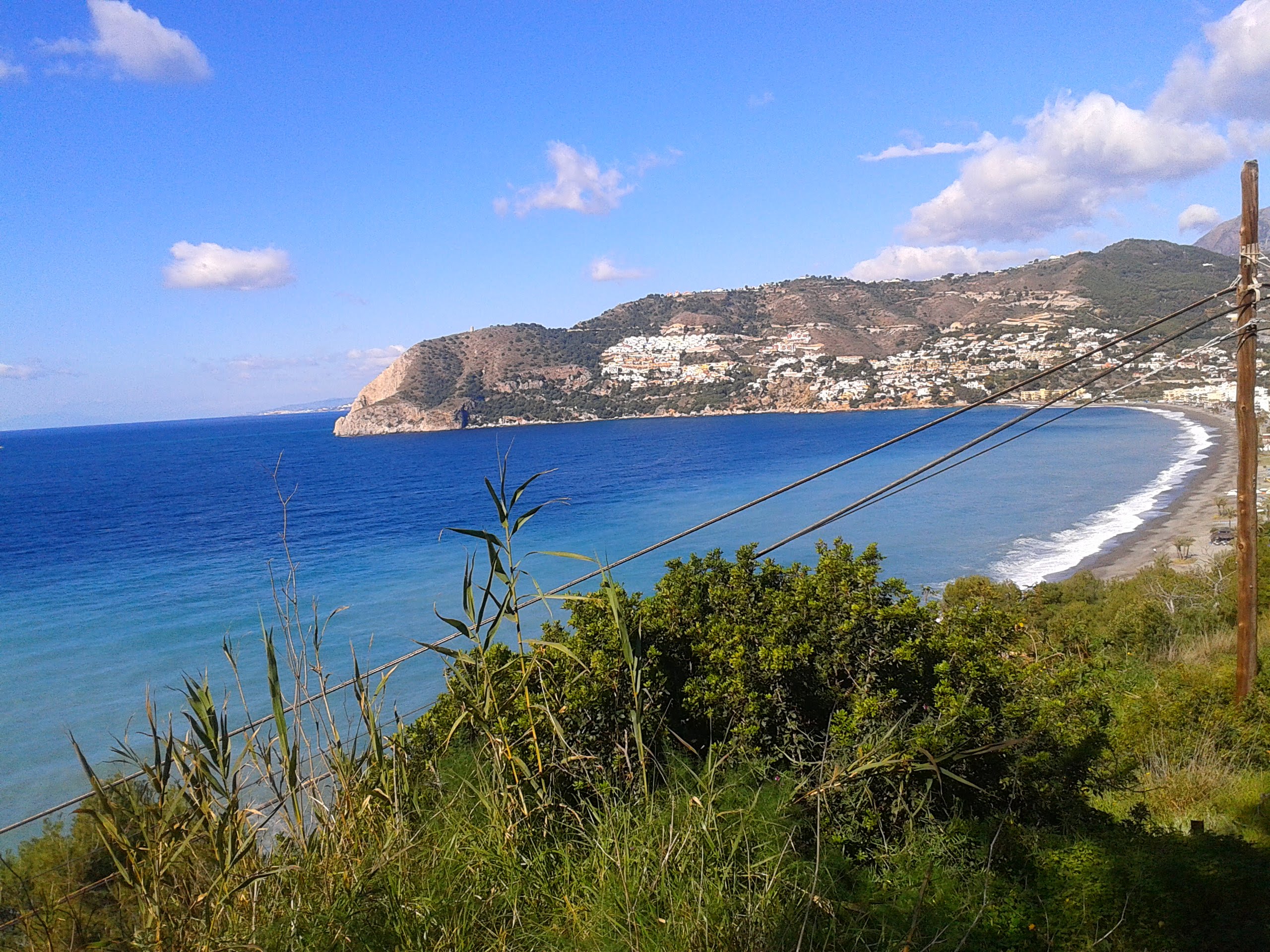 This is the second in a series of blogs sharing the inspiration behind some of the recordings on my Youtube channel.

I was privileged to be able to go abroad for eight weeks in the winter of 2004. Suffering from ill health, S.A.D., as well as spinal issues, it was a wonderful opportunity. I was anxious because we didn’t know anyone in the Southern Spanish village we were renting an apartment in, and I’d never been out of my home country, England, for such an extended time.

By the time I arrived, with all the preparation, I had very little energy, and needed to spend a lot of time simply resting. It was peaceful- apart from parrots screeching- with spectacular sunrises and sunsets, and the joy of my first ever sighting of dolphins in the distance.

“green flying birds and the promise of a dolphin”

The locals were exceptionally welcoming and friendly. I didn’t speak a word of Spanish, using my beginners guide book all the time ( pre smartphones).It was so frustrating. I felt like a tongue-tied 2 year old. I love communicating with people from different cultures, when I have my energy. Growing up in London has given me lots of opportunities, which were less common in the countryside in North Yorkshire I was living in. Here I’d found a beautiful location that attracted a variety of winter residents and overseas visitors, as well as an international population that had made their home there.

Uniting us all again.

I absolutely fell in love with this beautiful village. My health improved. I was keen to return the following winter and enrol at language school. I felt determined to overcome the inner voice which said, ‘ you can’t learn a language’, based on school experience. It wasn’t easy, it took a lot of hard work, but every year I improved. My first ‘intercambio’ – an equal exchange with Spanish people wanting to practise their English was amazing. (I highly recommend it as a way of improving a language.) Not only did I make Spanish friends who invited me into their homes, they were patient with my mistakes from their own experiences, helping me feel less self-conscious in speaking.

My health much improved, I had an amazing opportunity to record my songs in a newly opened Music Academy in the adjoining town. This was so special as initially I was working with compositions, I’d written many years previously. Encouraged by the musical director, Russell, I wondered whether I could write a song about what this beautiful village meant to me. A way of giving back in some way. The tunes and the majority of the words flowed easily.

To help my songwriting, I’d bought an inexpensive voice recorder, and was having fun exploring recording the sounds of the village, surprised at the high quality of reproduction. Listen carefully at the beginning to hear a crowd scene from their big Fiesta, ‘Semana Santa’ and a man shouting across the street.

Then you can hear local frogs croaking in the background. (It’s not my overtoning on this occasion, which has been used on other tracks.)

I was sharing my enthusiasm with my Spanish teacher and she assumed I was going to sing in Spanish. It hadn’t occurred to me, not believing that my Spanish, especially my pronunciation, was good enough. I decided to have a go by repeating one of the English verses in Spanish. When it came to recording my composition, I was extra nervous because the unusual flamenco type rhythm that Russ, as musical arranger, suggested on his guitar was challenging for me to sing. But magic happened. When I opened my mouth to sing in Spanish, I relaxed, and felt as though I was a native speaker, I believe something special came through my voice.

Can you hear the difference in that verse?

After receiving initial positive feedback and a friend’s suggestion, I offered my song to the Ayuntamiento (Town Hall) to help promote tourism from an English visitor’s perspective. It was so exciting and I had a lot of fun meeting ‘officials’, who initially welcomed my idea. I felt so happy to be validated by the local Spanish government, and sharing my passion for their home area. It certainly improved my confidence in speaking Spanish!

When the tourist website was updated it was omitted. The people I spoke to, who had agreed to its free usage, did not have the final say in the outcome. I was disappointed, but initially uploaded it to a new experimental Spanish video site, started by a cousin of a new Spanish friend.

Now I’m delighted it’s available globally through my YouTube channel for anyone to enjoy, with on the date of writing this, 1,198 viewers. Can you help me share it even more widely?

And if you are left wondering what is the name of the village,

“that stole my heart”?

I deliberately left it out of the song but in appreciation of your reading my blog, I will disclose it: La Herradura, Almunecar, Granada.